Bohemian Rhapsody: will the Freddie Mercury biopic be a whitewash?

The Queen frontman’s Zanzibarian roots are often forgotten when discussing his life. But he didn’t hide from his Persian heritage – and neither should the movie.

There is a sweet black-and-white photograph of Farrokh Bulsara from 1946 in a pram in the garden of his Indian parents’ home in Zanzibar, then a British protectorate. When he died, 45 years later, very few of the millions mourning knew him by that name; by then he’d become Freddie Mercury, Queen frontman. A forthcoming biopic called Bohemian Rhapsody will focus on the singer’s life after he formed Queen, but it would be a shame if it ended up whitewashing Farrokh’s story.

So how did Farrokh become Freddie, you ask? His parents, Jer and Bomi, were Parsees whose ancestors came from Persia. India-born Bomi went to work in Zanzibar as a registrar for the colonial government, taking his wife Jer with him. When their son was eight, they sent Farrokh to a British boarding school near their home city of Bombay.

After leaving school, their son was known by his nickname, Freddie. When Zanzibar became independent in 1963, there was a revolution in which the wealthier Indian population was targeted, so his parents fled with Freddie and his younger sister Kashmira to London. It was while studying at college a few years later that he met Queen’s other founding members. When they began touring, he adopted Mercury as his surname and his Asian upbringing faded into the background.

Queen were founded only two years after Conservative politician Enoch Powell’s notorious “rivers of blood” speech and racism towards immigrants was intense. So a whitewash of his Asian origins may have been an astute commercial move. “Being perceived as Indian or ‘foreign’ was clearly a disadvantage,” argued journalist Palash Ghosh in 2011. “Luckily for Freddie, with his white skin and dark brown hair, he was physically indistinguishable from any European (or indeed, any British) man.” 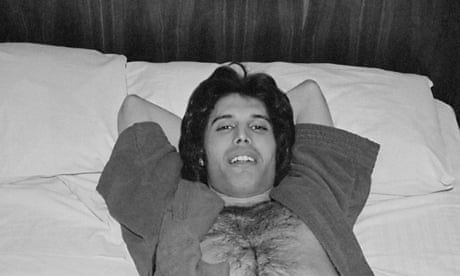 The night Freddie Mercury chatted me up in Heaven

A few years ago, his brother-in-law Roger Cooke sought to explain Mercury’s attitude towards his roots: “To an English mind, Asian means Indian. It doesn’t in Freddie’s particular case; he was Persian by ancestry. He was accused of denying his Indian heritage. I don’t think he ever did, but if he did, it would have been because he was Persian.”

Mercury himself never spoke publicly on the subject, yet at his funeral in 1991, two white-robed Parsee priests officiated. Mercury had arranged the ceremony to be in keeping with his parents’ wishes. His mother said in 2011: “Freddie was a Parsee and he was proud of that.”